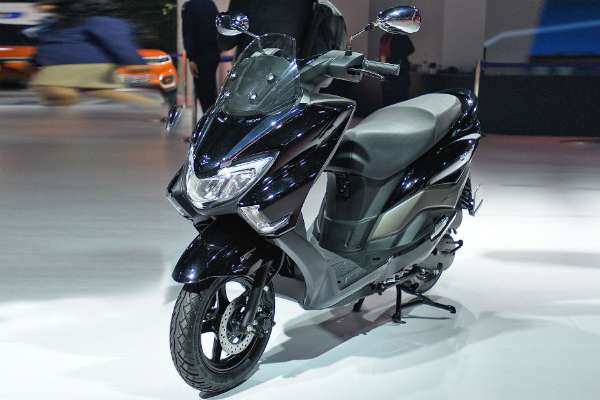 If you have come here after watching our video on YouTube, do turn on the notifications on for our website and get treated to fresh news, reviews and comparisons daily. News sometimes gets published here before you here from us on YouTube. Read more about the Suzuki Burgman Street and Honda Grazia below

Suzuki Burgman vs Honda Grazia below

First, let’s start with the Suzuki Burgman Street. The Burgman Street resembles a maxi-scooter but in a smaller avatar. The scooter gives one the perception and appearance of a long two wheeler. The front portion is attractive and it features a windscreen on top. The windscreen is a good touch but really does not stop the wind from blasting into the rider’s chest. It has a twin headlamp setup, on the front apron. There are telescopic front forks and it also gets large 12-inch wheels. The tail is long and gets a stylish LED tail lamp. There is a lot of under seat space as well, 21 litres to be precise. That is more space in the scooter than the Grazia. One can fit a full-size helmet and also some extra stuff along with it. The under seat storage is good for utility. The Burgman Street also gets a 12 volt charging socket with its closed mobile holder. The scooter next to the ignition slot gets a bottle holder that can fit a one litre bottle easily. There are two hooks on the scooter that make up for carrying extra loads when required. There is just too much space on this bike than on the Grazia. The seat on the Burgman Street is also wider and more comfortable than the Grazia. But when it comes to the sitting position with the placement of the handlebars, there is a problem. The handle bars are not integrated with the instrument cluster’s housing. Thus, making them sit closer to the seat. In traffic, when you are trying to maneuver a tight spot, the handlebar will hit your knee. The instrument cluster itself is a very nice unit and is shared with the Suzuki Gixxar and the Intruder. The last but most important detail about the design aspect of this bike is its great foot rest arrangement. The Burgman Street in true maxi-scooter style allows the rider to place his or her legs forward and relax. This feature makes the Burgman Street the clear choice over the Grazia when it comes to riding long distances. Another feature we should point out about the Burgman is that the LED headlights provide better illumination than the Grazia’s LED headlights which cannot illuminate well even on high-beam.

Enough design talk about the Burgman Street. Now let’s talk about the scooter it has to fight, the king of the hill, the Honda Grazia. This 125cc scooter is not what anyone expected Honda to deliver or even introduce. There were basic scooters, designer scooters and performance scooters. But none of them brought all of these traits together and combined in perfect harmony like the Honda Grazia has. The Grazia is not only a scooter that has grown on me ever since it has launched, it is a scooter that I have absolutely adored. Minus the under seat storage space, the relaxed riding foot, the bottle holder and the LED headlamps with visibility, it is as good as the Burgman Street. The scooter is now common but still gets second glances for its looks in traffic. The Burgman Street gets questions about what it is, the Grazia gets the looks. The headlights on the Grazia are bigger than the Burgman and I still can’t understand why they are not better at illumination. The one place in all seriousness the Burgman Street defeats the Honda Grazia is build quality and touch and feel of materials. Let’s be honests, looks will only get you so far that you buy the scooter, but living with it is part of the deal. The switches, the digital instrument cluster, the seat, the handle grips and everything else is so much better to handle on the Burgman Street. The red stitching on the Burgman’s seat is type of small touch even Honda could have given on the Grazia, their premium scooter after all.

These both scooters are totally different animals but are trying to do the same things as one and other. The Grazia with its 125cc engine is a pocket rocket. With the same capacity engine but with a air-cooled platform the Burgnam that handles well is a straight line missile for a scooter. The Grazia makes around 8.5bhp and 10.5Nm of torque. While the Burgman Street makes about a little more power, roughly 11bhp, it’s slightly longer in its overall dimensions, wheelbase and more than one kilogram heavier. Also believe it or not the Grazia on paper is a wider scooter than the Burgman Street. The both are excellent around traffic. The Burgman is comfortable and soft to maneuver around traffic. The Grazia on the other hand is a dog pulling on its leash. Twist the throttle and you will be amazed to see how this little 125cc scooter can exploit every little gap it’s shown. In traffic, in comparison to the Grazia, the Burgman did feel more cumbersome to ride.

The straight are a different question though. We have done multiple acceleration tests with both these scooters, with different riders. The outcome that’s very solid is that the Burgman has better top-end performance than the Grazia. The Grazia is quick of the line but after the 75km/h mark starts losing steam. Mind you, it can sit comfortably at 85km/h to 90km/h on the highway. But it’s a odd result we saw that the air-cooled Suzuki, 125cc engine was still pulling strongly after the 80km/h mark. At 75km/h it overtook the Grazia which just wanted to not build up revs after that.

When we come to handling, this is not the strong suit of both the scooters. We would suggest that you go for something else like a TVS NTorq or SR125 in this respect. But if you really want to know the handling characteristics, the Burgman proved to love corners more than the Grazia. This might sound odd, as it is a bigger scooter and both have 12-inch tubeless tyres. But the Grazia just did not want to turn and stick at an intended angle like the Burgman. The Burgman Street in this respect was way better.

The brakes too are good on both scooters. The initial bite on the Burgman Street is harder than the Honda Grazia. But the Grazia does stop in lesser time and distance than the Suzuki because of its smaller size.

They are versatile and trendy. Both these scooters can play the different roles asked of them in their own capacity nicely. The Burgman is a great practical scooter that can take on duties of a small car. The Grazia is a king in traffic and brilliant for shooting around town. The mileage figures are similar too. The Burgman Street has a slightly bigger tank too. Well if you are looking for something for work that has to be highly practical, the Burgman Street is for you at a price of ₹68,688. The Honda Grazia on the other hand comes in at ₹58,000. That’s right folks if you want all the extra features, practicality and comfort, you have to almost shell out ₹10,000 extra. So who is the winner here? We know the merits. We know the problems. There is not a clear winner because of this price gap. So we would still suggest you go with the Honda Grazia unless you have plans of touring long distance with your scooter and need the extra space. The Suzuki Burgman makes a lot of sense but the extra price is not bringing it close to the affordability and smart buying prospective of the Honda Grazia.

Login to quote this blog

You cannot quote because this article is private.